I mentioned in my post yesterday, that my reward will be a night out with the family. What a great night it was! Along the way, we all got a pretty good lesson in charisma.

See, I am not what you call a crazy fan. I love my music and the music I listen to is pretty versatile. There are certain artists or bands I really love though and the ‘Foo Fighters’ are definitely amongst them. Still, I could probably only name a few of their songs and I would never ever be able to tell you which album their from.  My husband is slightly different. He his basically a walking ‘Google’ (no more Encyclopedia…) in regards to music. You ask, he gives you the answer. Needless to say, that he is a big ‘Foo Fighters’ fan. So quite a while ago he got tickets for this concert, here in our city.

I was a bit hesitating as I was not sure how good it would be to take the kids to a concert like this. But given the fact that he had booked seats I thought it would be fine. And in the worst case you can always leave, right?

Well, there was no leaving. The kids had a great time and so did we oldies. What an amazing concert… See, I have not been to many concerts in my life. And all of the ones I’ve been to were in Switzerland. Now we do have “big” stadiums there too (kind of) but nothing like the one we were in yesterday. They expected over 60’000 people. A number that kind of scares me. It’s a lot of people in a enclosed area…

Anyway… given that we had seats booked, we were quite far up, which was awesome under the circumstances. If it would just be me, I would still prefer to be down there and be able to dance and hop and be closer. But sitting up there was amazing. All those people down there! All those people around you! Everyone in a good mood, singing, enjoying the music and dancing. And what a show. I’ve been to concerts where I thought that the voices sounded so totally different, where I thought the music was… well… soso. But yesterday was just great. Dave Grohl and the boys owned the place and they owned the people in there. 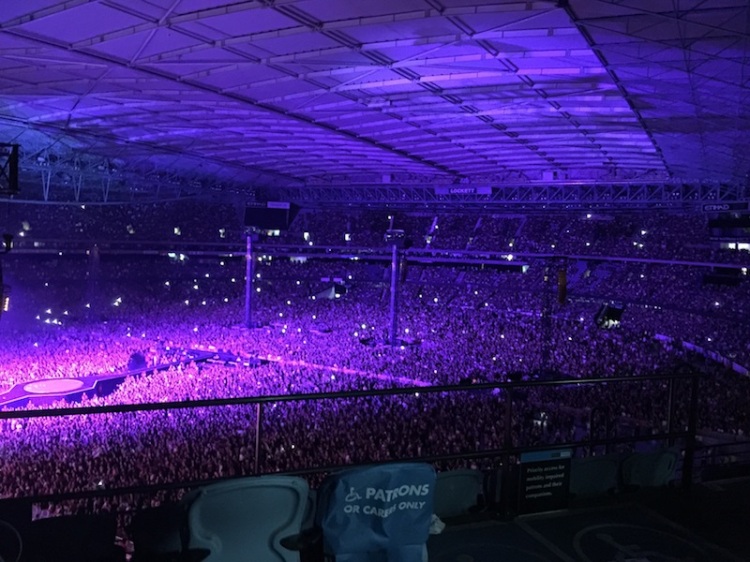 What a crazy feeling… I wonder how much of a kick something like this gives you. To see your success so obviously in front of you. There was an ocean of people. Imagine seeing this! And imagine they all sing your song(s). It must feel great. I wonder if they still feel pressure these days, after being successful for so long.

It was loud and crowded and hot. But it was a great treat and the perfect ending to a really great day.