It was a lovely surprise to get an email from Momma asking me if I’d like to write a guest post for her.

Sorry, how rude of me! My name is Ritu of But I Smile Anyway. I’m also a mum, in the UK, and also I’ve just started work as a Nursery Teacher. I like to write about all sorts, from recollections and reminiscences, to jokes and quotes, stories about my family, my thoughts on various issues, and all about my cat too!

Please have a mosey on over, and have a nose at my posts, and if you like, join my lovely followers!!

I had a think, and came up with something I hope you will enjoy reading!!!!

He’s one of the younger children in his class, and it always feels like he’s learning certain things far too young! (Of course I shouldn’t think like that, I was actually in the year ahead all my school life, a whole year younger than many of my peers, but, you know, that’s me, not my Lil Man!!)

Now the thing is, I believe that when they go back to school after this week off, they will be starting to touch on a particularly interesting topic, in PSHE, i.e. Puberty, leading to SEX EDUCATION!!!

Noooo! Really? He can’t be old enough to know about the nitty gritty, the ins and outs (pardon the pun!) of the body, and what happens when we mature!!!

It takes me back to the time we learned all about these things, at school.  The whole girls and menstruation thing… that lesson sticks in my mind, as the girl I sat next to, found the whole topic so nauseous that she actually threw up all over our desk! That was because the teacher wanted to educate us on how a tampon works, and she lowered one into a jug of water to show the expansion, and moulding of the offending object, it was too much for my partner!

And the video we were shown, to show what happens between a man and woman… picture the setting… my old school building was a pretty old house, and there was a large room used as the library, which was all dark mahogany wooden shelving full of dusty old books, dark carpet, and heavy maroon velvet curtains.  In those days there weren’t these interactive whiteboards, just a 32” TV in a special cabinet, that was wheeled into place, and a VCR player, so we had a special screening of this program in the library, with the curtains drawn, in darkness…. Thinking back it was almost like soft porn! Well, it was basically tow people having sex, on a white table in a dark room, slow and steady, showing that it was an intimate moment that happened when a man and woman fell in love…

Ok, so no one was sick this time, but can you imagine the reaction of 25 girls (it was an all girl’s school!) at seeing a naked man and woman having SEX!!!

Well, let’s fast forward back to now… I’m pretty sure that the same techniques won’t be used, or the same video (well, I hope not!) with my son and his class mates.  Added to the fun of learning about what happens in puberty, is the fact that this is a mixed school so OMG! I do not envy the teachers!

He is so naïve, I don’t know what he is going to make of it all, he hates girls, and his willy is for weeing, nothing else!!!  But he still remembers the word ‘puberty’ from his end of term test… I think they wanted to see what children knew about it so far!

Lil Princess, who at 7 has a few years to go, scared me into thinking I would have to discuss the whole subject when she was about 3!

She was sat in my bed one morning, and looked out of the window. “Where babies come from, mummy?” I was lost for words! Me! Nothing to say! What do you say to a 3 year old? I don’t like to make too many stories about reality, but hey, this was too young to go into detail! I looked at Hubby Dearest, who stared back at me with beseeching eyes… “You sort this one out honey!” was what they said to me!

Well, I cleared my throat, and started with the whole “When a mummy and daddy love each other, they want a baby, and so things happen and then they get a baby!” I smiled manically!

“No, that’s not where they come from!”

Oh dear God! What did she know???? “I asked, with dread “Where do they come from then?”

“From the window!” she announced proudly!

Thank God for that!!!!  I could cope with agreeing with that one for a few years!

I wasn’t sure what she meant, had she seen the fabled stork in Dumbo? But it all became clear a little while later. You see, I have this figuring on my windowsill.  It’s of the Laughing Buddha, with lots of babies surrounding him. I was given it when we were trying for a family by my mum, and I will keep it forever! 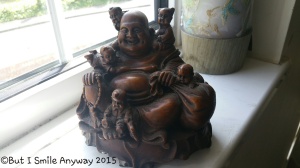 She wanted to know where those babies had come from!!! Had she been able to speak more eloquently at 3 I would have been able to understand but no, our minds rushed straight to that point all parents dread, the Birds and the Bees talk… even though she was a mere tot!

I should be ok when it is Lil Princess’s turn to talk about these things.  After all, when I learned, I had to then go through it with my first cousin, who is my age, but in a different country!  My aunt requested I tell her all I knew, as she was not sure what to say… so here I was a child on the verge of hitting 11, teaching the facts of life to another 10 year old!  Well, that was fun, as you can imagine! Here I was, armed with all these leaflets that we had been given at school, with rather graphic pictures and diagrams, and basically we giggled through them all!

It can’t have been too bad… she is the mother of 2 kids now, and she obviously know what to do!

Then when I was older, another cousin of mine enlisted my help in the ‘sex talk’ with her daughter. She herself had never had this at home with her own mum, so she was so nervous to have this discussion with her own daughter… enter the younger, lil cuz, who was more hip, with it, and about to embark on her teaching degree… “Ritu, you do it!!”  And so I did!

Back to Lil Man though. I haven’t had this talk with a boy before, after all I am not a boy, I haven’t experienced the changes he will, so I have already told Hubby Dearest to get prepared.. they will be needing some more father/son bonding time soon!!

And I have been very helpful, I have literature ready. 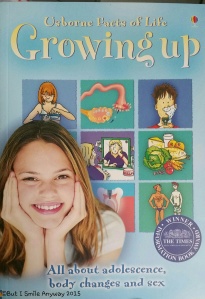 Yup, surely that’s all we will need!

Really? This is Ritu you’re reading about! How can that be the only book I have…

Check these beauties out! I have had to hide them for a few years, possibly not appropriate bedtime story reading for young children, but I could bust ‘em out soon… 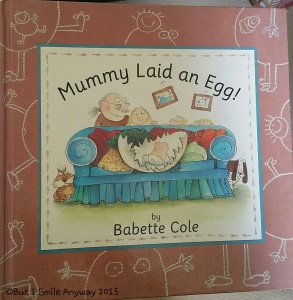 And… my piece de resistance…

I actually read this one as a bedtime story to Hubby Dearest! It’s hilarious, and genuinely written for children to understand the facts of life!!!!

I think we’re all ready, let the puberty talk commence…

Come back for more on But I Smile Anyway!