The answer to this question is pretty simple to me: No!

I would never give up a day in my life to see what the future may hold. I simply don’t want to know. I feel that we involve ourselves way to often in asking “what if” or worrying about the future. The future is something we cannot change. As much as we want to, we won’t be able to. It will simply happen.

Of course we can try to fix mistakes we’ve made in the past, hopefully learn from them and make things better. We can try to fix what goes wrong now in the presence in order to create a better future.

This idea about predicting the future and having the power to then change something scares me. There are so many movies about this one subject and each and everyone of them have their own little message. Look at “The Terminator”! How many years since the first movie screened? No clue, but hey, it’s been a while. And they are still chasing. They are still trying to figure out what would happen if… Actually the subject is of course a great one for movies as you can produce one prequel after the other. It will never end as each change will trigger something else. “I’ll be back” indeed!

It’s what I believe and it’s why I wouldn’t change anything and why I wouldn’t want to know anything about the future either. The moment we gain knowledge about what will happen we will try to change it. We will maybe even try to take advantage of it. And it wouldn’t be okay.

Look at “Back to the future”. Marty gains knowledge about his future and he changes it. What follows is a lot of things that might not have happened if he would not have changed it in the first place. 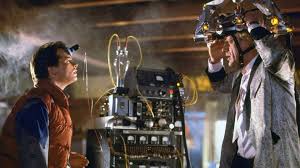 Maybe it all seems so much better, so much easier. But think about what you might give up? All the things you don’t know about. The things that might happen in the time between now and the time in the future you might check out. Maybe you could make something better in that very instant but by doing so you would make something worse for someone at some point.

At least that’s what I believe. And giving up a day of my life for risking screwing up anyway? No way! It’s not worth it. I want to live in the presence as much as I can. Do my share to make this world a better place here and now. And I think if we all have this approach we can actually do something. We can make it better and maybe influence the future, maybe even “change” it.

That I’m willing to do.

Inspired by the Daily Post Daily Prompt – Advantage Of Foresight

12 thoughts on “What The Future May Hold”