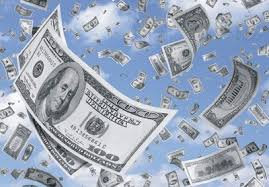 You’ve just won $1 billion dollars in the local lottery. You do not have to pay tax on your winnings. How will you spend the money?

Wow… that’s a lot of money. Honestly, I would probably be slightly under shock! I would look at the message again and would wonder if it’s really true. Then I would hug my family, knowing that if we don’t go totally stupid we would be all set for the rest of our lives. All of us. The kids as well.

And that’s were it all starts. Don’t go crazy!

I would head out and go “crazy” and buy a nice bottle (probably a case) of bubbles. I would sit down and have a glass of bubbles, smiling. I would then start setting up everything with my husband to make sure the kids get their parts (probably each 1/4 of that money) and it’s invested well and safe. Then I would decide on a couple of charities with my hubby and donate a part of our half to them. After that it would be about investing it. A way that will make us money but is still safe. I would buy a house. Nothing crazy. Just a nice house for the four of us. What I would try to avoid is living differently than we do now. In my perfect world I wouldn’t want to change much. Of course you would probably spend money easier on things than when you don’t win such a massive amount but I still think you need to be careful.

This is weird. I thought it would be easy to write about it, but it’s not. There’s just no flow to this post. A flow I usually feel when I’d like to make a point. I wonder why this is the case. Not because I don’t want to get to the point where I tell you what I would buy and what I wouldn’t. Gosh, I honestly have no clue what I would actually buy. But more because it seems difficult to imagine how much life would change. I believe it would. I believe that although that amount of money would make things easier, it might also make things more complicated.

How would your friends react? What would they expect you to do? Would your relationship with them change? How would it influence the kids? Or us? Although we’re pretty sure now that we wouldn’t change we might. Money does change you. It shifts things. Do I want things to shift? 1 Billion is a lot and as much as I try to believe that you could handle that amount of money without changing, it might not be the case. And that kind of scares me.

I like things how they are in my life. Yes, in a way you always wish for more money, but my life’s good. My life at this stage feels like a win in the lottery and I’m not sure how much such a huge win in the lottery would jeopardize it. It’s easy to say that you would not change anything really. In theory it sounds doable. But what if your bank account grows so rapidly over night? Could you really control the urge to indulge yourself? And could you stop when you need to?

There are so many questions I simply don’t have an answer for. All I know is that the past showed that being a lottery winner can cost you dearly.

Inspired by the Daily Post Daily Prompt – You’re A Winner!