Recently, in a TV show I like to watch the issue an older woman has to get a job was brought up. And it made me think what the chances are for a woman my age to land a job in a country that I’ve never properly worked in. I worked for an event the first year we were here and did some little freelance jobs on the side over the last years but nothing that would give me a proper reference. And, of course, there is the age thing.

Nobody wants to hire a woman of a certain age. What they want is a 22-year-old. – Angela, Rizzoli & Isles

Is it really true? If we want to go back to work as 40plus year old women, will we struggle to find a job? I guess so. But how frustrating is it? Do we really lack something besides being young and fresh? Are we considered so disconnected?

I’m torn. Torn between thinking that a woman who wants to go back to work after spending a decade with her kids deserves the same chances as a young woman and giving a young woman a chance. And there is the question: Who deserves it more? The young girl who only just makes her way out of being dependent of her parents or the woman who maybe sacrificed a good job for her family?

I also ask myself who actually brings more to the table? I tend to think that someone older is more balanced than a young girl, maybe even more reliable. But is that really the case? While the 22 year old might go out and party and maybe appear to work hungover, the mom could be sleep deprived in a similar way because a sick child kept her up all night.

I look around and realize how many of my friends who went back to work had to step down the ladder massively in order to get a job. All of them work in positions far below of what they were used to do before children. Do we really lose track of what’s going on in the job-world while we are changing diapers, wiping noses and cleaning up Legos? Do we really turn into a driver, cleaner, dishwasher and laundromat in the eyes of the people that hire for certain positions? Where is the risk in hiring an older woman?

Is our commitment questioned because we have kids at home, waiting for us and our day of work will not be done by a certain time but continue the moment we get home? Look, if I decide to go back to work I probably know what I get myself into and i will make sure that I’m 100% committed to the position I’d like to be hired for. I wouldn’t do it with only half of me in. 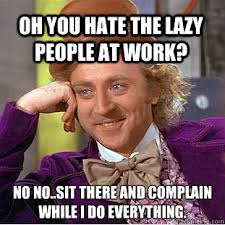 While I was still working I’ve seen many people of all ages in all kind of positions. Commitment has nothing to do with age. It’s a character thing. I’ve seen a 22 year old (maybe she was 25) who was spending 3/4 of her time complaining about how much she had to do and not getting anywhere, drinking coffee and talking on her phone to friends. On top of that she was extremely rude with people she had to deal with work-wise. Why did she keep that job? Don’t know. I’m sure it had nothing to do that she was hot and her blouse kept opening further whenever her boss walked passed… And there was the lady who was only helping out on occasions because they didn’t wanted to hire her full time as she was almost 50. Her work was usually done in half of the time she was hired for. Did she then just sit around, drinking coffee or left earlier? Nope. She checked with others if they needed some assistant as she was paid for a week. If nobody needed help she would approach the person who was her supervisor and tell him that she was done. She was basically risking the rest of her weeks payment.

She could have worked slower. But that was not who she was. She was committed to finish her work in the best way possible and that meant for her also as soon as she could. Thankfully he saw it the same way and made sure that he was able to give her some additional work so she would get her weeks payment.

Hiring the right person for the job is a difficult task and I think it’s all about reading people correctly, seeing passed that mask everyone puts on when trying to get something they want. I understand that a person has to fit in a team. But I still think everyone should get a chance to be seen and heard and assessed.

No matter how old you are.

31 thoughts on “A Woman Of A Certain Age”