I believe that the most important thing in our life is following your gut feeling. Not only to keep us safe but also in relation to trusting people in your normal surrounding, making friends, picking a place to go on vacation, all the way down to the food you pick to eat or not eat. For whatever reason over the time growing up we learned to ignore our gut feeling. We learned to “switch on our brain” and think things through. Because often the gut feeling doesn’t really make sense if you start analyzing it. I had a gut feeling moment on the weekend. Nothing major but it made me decide to re-post this piece again as a blast from the past.

When’s the last time you followed your instinct despite not being sure it was the right thing to do? Did it end up being the right call? Daily Prompt

In a way you always kind of question your instincts. Don’t you think so?

I guess as much as you want to follow that gut feeling there are always second thoughts, at least for me. But I’ve learned over the time that following my gut feeling is actually a good thing to do. No, it is the right thing to do!

Very often you try to “overwrite” your instinct with rational thoughts. But they might cost you!

A little while ago I took part in a self protection workshop for women held by a Krav Maga instructor. And honestly it was one of the best workshops I’ve ever attended. The workshop was only theoretical (I admit, I am very keen on doing the practical course as well…) but it taught me so much!

Besides a couple of new things to watch out for, it taught me, that my dad gave us some pretty good tips already back in the days and that your gut feeling is always right! Always listen to your instinct!

I believe in my gut feeling and I try very hard to follow it. But every now and then I question it and I try to reason. And that course taught me to not do this for many reasons but mostly for one story he told us (I might have forgotten some details but the essence is there): 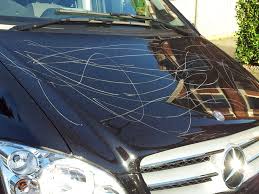 A woman arrived at her car after work, late afternoon, only to find her car, which was parked next to the train station, covered in scratches and a business man out of breath standing next to it with his phone in his hand.

He told her that he watched a guy scratching the car and tried to get him but wasn’t successful. He was just about to call the police but offered to give her a description of the guy. He said that he was in a hurry as he had to catch his train but wanted her to be able to get that other guy. When he was done describing the guy, he realized that he had missed his train.

The woman felt sorry and asked him if there was anything she could do (as he obviously had tried to help her). He asked her if she could give him a ride to a bus stop not far from the station, so he could catch the bus from there. She agreed but when getting in the car she suddenly got worried. She had a really bad feeling about this situation.

Unsure about what to do she made up a story and asked the guy, if he would do her a favor and get out to help her maneuver the car out of the parking space as she had had a couple of incidents lately and told him that her husband would not be happy if she would damage the car even further. The guy got out and she drove away as fast as she could, leaving him standing there.

Together with her husband she opened the briefcase but what she found was more than a business card. What they found in this briefcase was duck-tape, handcuffs and a huge knife. They called the police and thanks to the prints they recovered from the briefcase and the DNA they were able to arrest the guy and connect him to a couple of murder cases.

The woman only just escaped a serial killer…

She followed her gut feeling. But she started questioning it.

It is hard to follow our gut feeling and it has a lot to do with the fact, that society teaches us to follow certain rules. Following your gut feeling very often does not apply to those rules.

I learned not to answer every question, not to give every information about myself or my family. It is pretty simple: I don’t have to! People don’t have to know! The more strangers know about me the easier it is to get to me. But then I was taught as a child to answer questions in a nice manner, to be polite. And not answering a question is very often mistaken of not being polite. I was told to answer questions truthfully.

I learned to watch people. Really watch them. Look into parked cars and while walking keep an eye on people around you. And I learned that if you have bad feeling about something or someone then there is a reason for it!

But what do you do if your gut feeling tells you to not answer, or to not wait or to refuse help, or not to apply to a ‘rule of society’ because it seems weird and in your mind all the alarm sirens are on full blast? What if your feeling tells you not to walk over to that guy with the map, who just asked you for directions? How can you explain that your instinct screamed ‘RUN’, when people consider you rude for not doing it? In moments like that it can be so hard to listen to your gut feeling! Because nobody will understand but you.

Although I probably always question it, I still follow my gut feeling. My instinct is the only reliable alarm system I have. I just need to listen to it. Yes, I very often tell myself that I have probably overreacted. But then: Better that way than being sorry…

14 thoughts on “Blast From The Past – Gut Feeling”