I remember spring back in Switzerland. I remember how it was up in the mountains were I grew up. How the snow covered valley and mountains started changing, one day at a time. The snow got heavier, wetter. The days longer and the temperatures warmer. Spring skiing was fun, especially sitting in the restaurants on the mountain in the sun, eating something hearty and being able to actually take your jacket off. Slowly the tourists started to disappear as it was kind of much nicer where they used to live. For us the muddy time was about to start.

See, when snow melts it turns into water and because the ground is still frozen the water doesn’t really get soaked up. Not only did that mean that the patches that were already snow-less turned into patches of mud but it also meant that the snow that was left was no longer nice and white but had a rather dirty look. 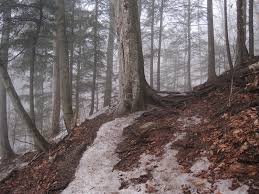 While our tourists were jealous of us during the months of winter for the beautiful snow we could enjoy on a daily base it turned around at this time of the year. Now we were the jealous ones. Jealous of them being in the lower regions of Switzerland where the fields were green already and the flowers started blooming.

It would take a while until we would get there. And by that time it was basically almost time for summer to arrive. I never had a great relationship with spring in the Swiss mountains either. For me, it kind of didn’t really exist until I lived in the “Unterland” which basically means all of Switzerland that is not a mountain resort. Only then did I realize how nice it could be…

Of course spring not only had those bad sides to it. Not even for me. There were many beautiful days. The days the snow finally was gone and the mud had dried up. We were finally able to ride our horses to almost every corner of the different valleys again, although some of them only became accessible early summer due to the massive amount of snow up there. And the sun was just something else. The birds were singing again, the butterflies and ladybugs appeared again and the air smelled so fresh. It was a mixture between new, green grass, fresh damp soil. I remember sitting on a log in the paddock with the horses, just chilling while they were standing there relaxing and enjoying the warm sun, slowly shedding their fur. It was something I really missed doing over winter, although I always tend to sit with our horses and watch them interact. From spring onward until winter started again it would just be much nicer and much more relaxing. Forgotten was all the mud…

It was not just the mud and the dirty snow that made me not fall in love with spring.

It was also the stupid hay fever. For me the days turned into torture the moment the trees and the grass started blooming. Unable to focus in school or to enjoy my horseback rides with swollen itchy eyes and an itchy nose and throat I cursed spring more than once. In fact I cursed it all the time.

On some days I just had to stay inside as there was too much out in the air and I remember the clouds of yellow pollen being blown around by the wind. It made me sneeze just watching it even behind closed windows. Especially the ones from the trees!

I’m sneezing by the way while looking at these pictures…

By that time I simply couldn’t wait for summer to arrive. What summer meant for me in Switzerland? Oh well, that’s another story, which I will tell in another post soon 😉

Inspired by a chat with Wasted Days And Wasted Nights and the blog event Show Your World.

34 thoughts on “I Remember Spring”