We all might have been there. We all might have worried about failing in your job, in your relationship, maybe in a sport your doing or a hobby that is close to your heart. To be honest thought all of those failures you would have been able to manage, learn from it and move on.

Success is not final, failure is not fatal: It is the courage to continue that counts. – Winston Churchill

There’s this one area in our life though, where I think failure has a much bigger impact than in others. When you become a parent your life changes forever. Suddenly there are unknown worries, pressure you would have thought might never get close to you. No longer are you responsible for only you. You are responsible for the life of your child. It’s a big game changer.

When you fail as a parent though, it’s a entirely different story. For me it’s the one thing I’m terribly afraid of. I must not fail as a mom!

Of course I know that parents are no super-humans. We make mistakes. We are not perfect. For sure something that also teaches a valuable lesson to our children. But what if one of those mistakes has a bigger impact on our children than we would have thought? What if that one mistakes leads to failing our children?

I often wonder how big a mistake has to be to fail your children.

Words and actions can scar people for their entire life. What if we don’t chose our words wisely and trigger thoughts in our children that affects their future? What if our actions lead to something terrible for them? It’s my biggest fear. 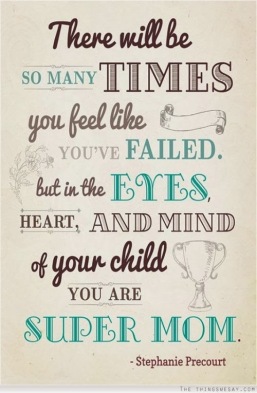 Although I have that fear, I don’t let it paralyze me. If I would let it, I would have probably already failed my children. We need to believe in our ability. We must believe in being good parents and also forgive ourselves the little mistakes we make. But we need to keep away from huge mistakes.

I’m trying to think about what failing my children would mean for me. So I figured I make a list of the things that I’m most afraid of:

There are many more things I think I could think of, but those things are the major ones. It’s a thin line of being aware of the things we don’t want to have an impact on our children, the things we don’t want to fail in and not letting them worry us too much. If we let it get too big and paralyze us we fail our children too. Because we won’t be the free and easy going parent they need. I guess the main thing we can provide our children with is love, respect and an open ear and open heart for them. Day after day after day.

Although Bill Cosby is probably not the right person to highlight I still thought this quote was pretty much spot on. I do have an immense desire to succeed as parent. And I know that it will keep me on track and hopefully away from making major mistakes. The future of my children is the most important thing for me. And I will for sure do my very best to not screw it up.

Are you worried about failing in this part of life too? I wonder what failing your children would mean for you?

Inspired by the Daily Post Daily Prompt – Must Not Fail