We often hear that phrase “What matters most is how you see yourself” and I totally agree with it. But what if you are young and you get shaped not only by yourself and the way you want to be, which you probably don’t really know anything about yet? What if the people that matter the most in your life, the people you look up to, you respect the most, suddenly turn on you? Criticize you for something that is not your fault and is totally out of your influence? It will get to you! No matter how strong you are. If you are young and only in the process of shaping into a confident person, it will have a huge impact!

I dislike (for the sake of not using the word hate…) to see people brush over a mistake they make just because they deal with children and not adults. I believe kids deserve the same amount of respect from us we are expecting from them.

I dislike it a lot when adults who are responsible for kids critizise something that the child has no influence on and can’t really change. Especially when it was this adult who made a mistake in the first place.

I dislike it when I child looks up to an adult and expects this adult to teach him or her something (or coach) and instead of doing the job properly this adult ignores the child and doesn’t give the needed feedback.

I dislike it when the feedback given has nothing to do with the child’s effort and instead of pointing out what was done right the mistakes other grown ups made are pointed out and used as criticism towards the child.

A coach or a teacher or any other adult who deals with children on a daily base and has a responsibility supporting a child has to build up the confidence of the child. In no way should his or her ego be an issue. I also think that if that person has an issue with how things are handled by other adults in this child’s environment it shouldn’t be made the child’s problem, but rather be discussed in a conversation between those adults.

It drives me nuts to see how selfish some so called coaches and teachers handle situations just because they feel like their ego has been “hurt”. Wake up! Think! Sometimes it’s not the child’s fault! Be a grown up and approach the other grown ups involved rather than not doing your job properly and letting a child down that looks up to you. What’s done there is undermining the child’s confidence.

Coaches and teachers demand respect from their kids. But they also want the kids to stick up for themselves. They want them to perform and be strong, be smart, be motivated and give their very best. I have no problem with that, it’s what it’s about.

What irks me though is that some people seem to forget that they have to show the same amount of respect, motivation, support, strength and effort to the kids too. And they have to accept it when kids stick up for themselves as long as it’s done in a respectful manner.

I often hear adults preach to their kids to admit when they make a mistake and I totally agree. But how should kids learn to admit it if grown ups they look up to don’t? If they don’t admit it and don’t say sorry but rather play an obviously unfair blame game? It’s sending out the wrong message.

Don’t kill that seed of confidence in a child just because you can’t admit to a mistake you’ve made!

I think it’s pretty simple: If you want the kids to look up to you and to respect you, to listen to you and follow you, then give them a reason to. As much as they need to prove themselves, you need too. 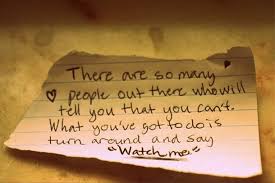