I recently had a little conversation with Sharon from Element about my ‘Couples’ feature and if it would be alright to write a story about a not so successful relationship as well. As much as I love to read happy endings I think it’s part of this life and why not showcase the other side as well and also how a not so happy ending is handled.

I think, Sharon’s text is just beautiful. It shows that no matter what you go through you can find a way out of it and you can actually gain from it, become stronger. I decided to not only put this post up as a guest post but purposely link it to ‘Couples’. Life is not always bright and pink and easy. But there’s always something good we can take out of a situation if we are willing to see it.

While reading I couldn’t stop thinking of the Phoenix raising from the ashes and when I found this image where it is combined with the figure of a woman, I knew that I’d found the matching image for this post.

Thank you again, Sharon, for sharing this with me here! I have heaps of respect for you. 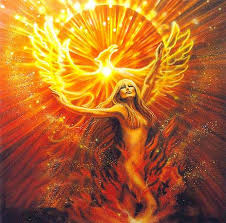 The reality is, no matter how badly we want it or how long we try, sometimes relationships don’t work. When this happens we are not aware of the fact that we set the situation up to learn a lesson. We don’t care, in those moments we are so emotionally and spiritually broken that this truth is the last thing we care about.

I first met my now ex-husband in 1989 while living in Northern Michigan. I felt an immediate soul connection to him. He was a very nice looking, charming and funny guy. I let myself love him in spite of some flashing red light bulbs that I chose to ignore. After a year together I became pregnant, did a reality check and looked hard at the light bulbs and left him. Knowing that it was the best choice for myself and my baby.

For eight years we were happy. Being a single parent is difficult but we did alright. Then his family called and asked me to come back. He had gotten married to a woman that owned a business, had been ill and died. They offered me the chance to take over her business and her home for a reasonable price. I thought long and hard about it and chose to go back. Not to him but back in order to build a life for my son and I and to give him a chance to get to know his Michigan family. That didn’t work well, he bullied me into marrying him. But I loved him and told myself that it was not bullying, it was romantic that we had this secret wedding in my office with a total stranger officiating.

During the next 10 years he took everything from me. The business, the home I wanted for my son and I, my confidence, my body, my happiness, my self esteem, my money and my privacy. I was so far down I had to look up to see bottom. I tried reaching out to his family for help but they ignored my attempts.

He absolutely ignored the fact we had a son. He made all kinds of promises to him that he never intended to keep. The result of this is my son wishes his father dead every day and calls him “the sperm donor”. I hope one day that changes and they can have a relationship.

We tried counseling for a short time, and I was hopeful that maybe it would help but after the initial free sessions he discovered how much it would cost and that was all the counseling we were going to have. I was disappointed because I wanted us to work but to him money was more important than us. The reality that we would not ever work hit home when I woke up in the middle of the night to him doing some pretty disgusting sexual things to me. He thought it was fun and acceptable, I didn’t.

After 10 years the universe worked it out for me. The company I worked for was bought out and closed. There was no work to be had anywhere in the area so I took the opportunity to “Visit” my family back in Wisconsin. I found a job and a place to live then went back for my son.

By this time he was an over the road semi driver. I timed my trip back to be there when he wasn’t. When I did get there we had a window of about 5 hours to gather what we could and get out of the state. So we put what we could in my car and his truck and left everything we owned behind. We lived in the apartment for months with nothing. No furniture, dishes, towels. We got out with basically the clothes on our backs but we got out. We were free.

It’s 7 free now and I am finally me again, as horrible as the time in Michigan was the time there was not in vain. I learned a lot about myself and survival. I found some wonderful friends and teachers. My son found some lifetime friends and the love of his life.

The most important thing for me is that my son didn’t get mean or bitter. He is the most wonderful young man. He is gorgeous, smart, kind, loving and the most goal oriented person I’ve ever met. He is the best of us both. Sometimes relationships don’t work but in this case the DNA did.

I hear through the Grapevine that he is with someone and they are happy and that’s good. Everyone deserves to be happy. I am!