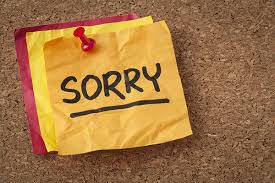 Why is saying sorry such a hard thing? Why do people struggle so much to apologize? But at the same time apologize constantly for things that are not important, you know, when they arrive sweaty or with their hair in a mess, when they think their clothes don’t match the occasion and so on. I don’t get it. People get even weirder when it comes to apologize to children.

Do you think it’s a power issue? Is it because when we apologize we admit to a mistake we’ve made and maybe to a weakness we have? Are we afraid that we make ourselves more vulnerable by admitting to making mistakes? Are we scared that people might not look at us the same way any longer? Why would we be afraid of all of that?

Making mistakes is totally normal. We are not robots, not programmed to work perfectly well. Besides that we all know that even the best technology can be slightly faulty too. We’re human beings are involved mistakes can happen. There is no such thing as being completely perfect. Everyone makes mistakes.

And still. If adults have to apologize to adults I think it’s often about the fear of suddenly finding yourself more vulnerable, maybe even on another power level. By having done something wrong, apologizing and in doing so admitting to the fact that we actually are not faultless, we might feel put on a lower level than the other person. We feel like we suddenly owe them something. Need to make up for what we did. It creates a feeling of being weaker. At least we might feel like that.

Now imagine we made a mistake towards a child.

In general adults see themselves above children. In a way we are as we are the ones responsible for them. But we are not. Kids are as important as we are and their feelings have the same value as feelings of adults have. We owe them the same amount of respect we should have for adults, maybe more.

So why is it so hard to apologize to children for a mistake made by an adult?

I’m not talking about stepping on a foot and apologizing for it. That is easy. I’m talking about making a mistake in the way you treat them. An obvious mistake. Like telling them off for something that has not been their fault at all. Why do we struggle to apologize in such a case? It’s because we have to admit to have made a mistake. And as an adult you don’t want to be the one who makes mistakes. You don’t want to be weak.

An apology to a child is admitting to a weakness and that makes it so hard.

I struggle with people who say that apologizing to kids is not necessary or even wrong. Why would it be. They are people too. People with feelings. Just because they are younger doesn’t make them less worth than a grown up.

36 thoughts on “Saying Sorry To Your Kids”