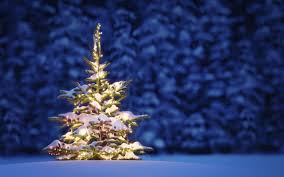 My parents had that one big tree in front of the house which was decorated with (back then very special) colorful lights. The lights stayed up all year, if I’m not mistaken, but were only switched on on the 1. Advent. From then on the tree was sparkling every evening.There were many trees decorated with lights but only ours had the colorful ones. It was the most common Christmas decoration.

In the beginning, when I was still little, my mom usually locked to door to the room the Christmas tree was in, decorated the tree and put the presents under it. That all happened on either the 23rd or the 24th, depending on what she was cooking. Later I was put in charge of decorating the tree and did so on the 24th while my mom was in the kitchen cooking. We were playing Christmas music all day long and I still remember the cozy feeling. Maybe that’s when I started thinking about everything, reflecting really. Because I had that me time while working on the tree. The tree stayed up for a week more or less. But latest from the 26th everything was kind of back to normal. Everyone was busy again.

It’s different here, not just because of the weather but also because of our tradition. For me it definitely makes a difference to have the tree up for so long, especially seeing it getting more and more colorful. I also enjoy having our little decorations outside, which we put up to be ready to sparkle first week of December. Maybe, having the tree up so early makes me reflect on our lives earlier and longer.

You know what gets me? It’s something that I’ve mentioned in comments already over the last couple of days: It’s the fact how much people rush around to get everything organized. And the pressure that builds instead of joy. Maybe I’m wrong, but I find that people get so stressed out about finding the right thing and totally forget that the main thing is to spend time with the people you love. Yes, it’s amazing to get a nice gift. And yes, it’s great if someone makes an effort to find it. If this ends up in stressful moments and maybe even arguments, it’s not really worth it. 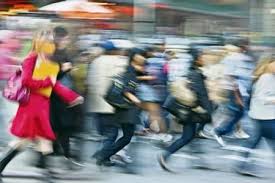 Sometimes it seems as if people prefer rushing around to actually be around. And then I wonder what the entire effort of decorating your house, putting up a tree and baking cookies really is all about? If you can’t take your time to really enjoy it, why would you bother?

I also often think about how fast things can change. And I guess it’s normal too as we approach the end of this year and the beginning of a new one. Maybe it doesn’t feel like a big change to some people but it is in a way. Something comes to an end and something new begins. Well, you might argue that it’s the same with a day… and I would probably give you that. And still. It’s why on New Years Eve we tend to reflect on the past year and everything that’s been and that has not been. It’s why we still make some New Years Resolutions. Because we do see it as a change. As a new beginning. As an end.

All the things we look back at and decide that we do not wish to encounter them again in the new year. All the good things we would love to see again. The crazy thing is that so much actually is up to us. Of course there are so many things we can’t influence. Things that happen, that come up. But we still always have a choice. We decide how we deal with it and what our reaction is. That’s how we can gain control over everything that happens to us.

I enjoy this time of the year. I enjoy reflecting on things, thinking about so many things. This reflecting is important to me and trying to explain to you what it does to me is hard. There are just no words for it. Interestingly I always have that one picture in my head when I try to come up with a way to explain it properly, to explain the feeling.

It’s from the movie The Never Ending Story. It’s when Fantasia was destroyed and all that’s left is that little sand corn (if I remember correctly). And that’s the one thing, plus the imagination of that one boy, that rebuilds the entire place.

That’s what reflecting does to me. It’s taking that sand corn and using it to rebuild the new place. My new place in the new year.

15 thoughts on “A Sand Corn To Rebuild”