Funny word, isn’t it 🙂 Bet you have no clue what it means… So let me explain it to you:

A Ribbelfüddli is a Swiss German word (that is probably not know everywhere in Switzerland either as it might have been made up by someone in my area) that describes someone who has ants in their pants. 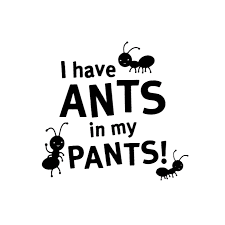 First time I heard the expression was years ago when I taught a dance fitness class to a group of kids. There was this one girl. She was adorable but could not sit or stand still. She was always on the go. Polite and all but she needed constant action. At the end of each term we had a little show for the parents. They learned a choreography they then performed in front of their families.

She was one of the fastest learners I have ever seen. Super sporty. I remember that the song we learned was The Spice Girls’ “Stop”. It made me giggle so often while practicing as I so often wanted to just sing “Stop right now…” to her.

So after their performed she could again not stand still for long and started running around in the room, giggling.

The funny thing is that her Dad was so totally different. He was the kind of person who could calm you down immediately just by being present. So there he was standing in the middle of the room watching his girl go stir crazy and just shaking his head. Then he looked at me and said: “She is such a Ribbelfüddli…”

And that’s when I adopted the word into my vocabulary…