Ever since I watched the first episode of a show called “Come Dine With Me” I thought that there should be a point system not only for hosts but also for guests. Right? I mean it’s one thing to be a good host but it’s another thing being a good guest as well. Sometimes I think that gets forgotten.

This will not be about the show or about me or us hosting people that were bad guests. I think we actually never had someone like this in our home. And if we would have it would for sure have been the last time they’d be over.

It’s about something I often observe when being out and about.

I’ve mentioned it before. My husband and I don’t go out often. Mainly because we both just love cooking and I think he is a fantastic chef. But also because so often we simply end up disappointed by not only the food but the way we are catered for. The dining experience as such doesn’t live up to what we hope it would be like.

We are not hard to please in that sense. It’s actually quite simple: The food has to be good, the price according to the quality and quantity of the food and the people need to be friendly. Efficiency? Maybe. But as long as they are friendly and you feel well looked after, the speed they serve you is almost secondary.

And here lies the issue most of the time. Maybe we need to lower our expectations…

Many of the restaurants here make you feel… well… let’s say as if you should say thank you for being allowed to spend the money there. And that’s not what it’s supposed to be like. Hosting is not everyone’s strongest talent but I believe that if you decide to work in the industry you should simply pull yourself together and put on a smile. Even if you had to take the job. It’s a job, you get paid for it. As I’ve done my fair bit of customer service myself, I know how much of crap you have to take. I do believe though, that if you are friendly and work hard, you can limit it to only coming from frustrated people who will leave their frustration out on anybody at anytime anyway.

That brings us to the guests.

I completely understand that you can get frustrated if the service you pay for is not provided to you. And rightfully so. Been there too. Believe me, I will not hold back if I think I’m not treated right (I might wait until after we got all food and drink and are certain we will never come back to the place in order to escape any spitting or worse in my food or drink…). But it has to be fair.

As I said before there are people in this world who simply take out their frustration on others. Waiters or people in general who work in customer service industry will experience it at one point for sure. What I find interesting is that you can’t put a finger on a group of people. You can’t claim it’s people who never worked in the industry and actually have no clue how hard it can be to accommodate everyone if the place is busy. Sometimes they work in the same industry and simply want to be on the other end for once.

Anyway. Whoever it is and for whatever reason they think they need to let out their general frustration in such a way: It’s wrong.

Yesterday was one of those moments I witnessed.

My husband had decided to take us all out for dinner to this little Asian restaurant just around the corner. The place is great. The food amazing, the prices fair and the staff really friendly, efficient and accommodating. The downside is, that you can’t make any bookings and as it is super busy every night you will have to wait for a table. So when we go there, especially with the kids, we know we will have to wait. Sometimes you are lucky though and a table becomes available when you walk up. Which has happened to us the last two times we were there.

So while my husband was trying to find a parking for the car, the kids and I already walked to the place to put our name down for a table. The hostess recognized us (most probably my daughter as she was there on a Daddy-daughter date night only recently) and mentioned that she would do her best to find a table for as as soon as possible but that it would not go as fast as last time which I thought was amazing as we are not regulars there. She was honestly friendly and offered us to sit down at one of the tables outside to have drinks while we wait but also said that she will most probably have to move us as there was a group waiting in the bar and she might have to use the table. Lots of info, I know, but bare with me.

So we sat down, ordered drinks and just watched people. My husband had caught up with us by that time. It was busy as a bee hive but the hostess and the staff always kept on top of things and super friendly. Then this woman walked up.

I knew right away that she was not happy. She approached the hostess and started telling her off for letting them wait for ages (I quote “we have been waiting for at least 20minutes already…). She also mentioned that she had called in the evening before to specifically make sure that something like this would not happen. Not sure why she would have done it and what good it would have been for as they do not take bookings… She kept telling the hostess off who tried to find a way to “ease the ladies pain” and at the same time realized the huge queue that was building because of the other lady.

Eventually the woman went back to the bar next door (the two places belong together) and continued drinking with her friends, gesticulating wildly and probably telling all kind of stories about the hostess… This woman on the other hand was just so totally besides everything. I could only shake my head and I’m not going to mention what I thought about her really…

The hostess put on her smile and took care of the backlog created by the other woman. She was so good!  When everything calmed down a little bit saw how her shoulders sank and the smile disappeared for just a little bit. I knew how she felt. The woman got to her. I couldn’t help but getting up, walking over. I try not to touch people I don’t know but I gently put my hand on her harm and told her how extremely well she was doing all night long and how well she handled the other lady. I smiled at her and she smiled back. It was the gratitude in her eyes that got to me. I didn’t say much. I didn’t do anything. She looked at me and took a deep breath.

I didn’t do it with an agenda. I saw a young girl doing her very best. I saw a woman similar age than I am telling someone off for something that can’t be changed, letting her frustration out on someone who did nothing wrong. Not really classy. 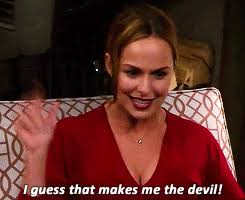 Five minutes later we got our table. I can’t shake the feeling that we got the other lady’s table. The food was amazing, the staff fantastic. The entire experience great. Eventually I saw the other woman and her friends being led to a table somewhere way in the back. Her face still looked grumpy. When we left the hostess complimented our children, smiled at me and said a quiet thank you, which left me with a smile on my face.

What goes around comes around… or is it more about paying it forward? In any case. Apparently what I’ve done yesterday it’s seen as an act of kindness. I’m not sure if you can call it that. I just think it’s normal. But maybe that’s the issue with kindness nowadays. People don’t consider being respectful and nice to each other as normal any more… 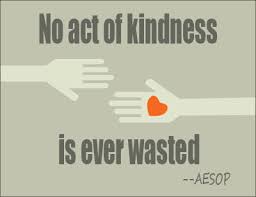 Inspired by a comment I left on Space, Time And Raspberries Blog post written for the Kindness Challenge.