The Orloj is mounted on the southern wall of Old Town Hall in the Old Town Square. The clock mechanism itself is composed of three main components: the astronomical dial, representing the position of the Sun and Moon in the sky and displaying various astronomical details; “The Walk of the Apostles”, a clockwork hourly show of figures of the Apostles and other moving sculptures—notably a figure of Death (represented by a skeleton) striking the time; and a calendar dial with medallions representing the months. According to local legend, the city will suffer if the clock is neglected and its good operation is placed in jeopardy and a ghost, mounted on the clock, was supposed to nod his head in confirmation. According to the legend, the only hope was represented by a boy born on New Year’s night. 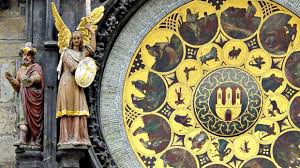 The Orloj suffered heavy damage on May 7 and especially May 8, 1945, during the Prague Uprising, when the Germans fired on the south-west side of the Old Town Square from several armoured vehicles in an unsuccessful attempt to destroy one of the centers of the uprising. The hall and nearby buildings burned along with the wooden sculptures on the clock and the calendar dial face made by Josef Mánes. After significant effort, the machinery was repaired, the wooden Apostles restored by Vojtěch Sucharda, and the Orloj started working again in 1948.

The Orloj was last renovated in autumn 2005, when the statues and the lower calendar ring were restored. The wooden statues were covered with a net to keep pigeons away.

9 thoughts on “World’s Oldest Astronomical Clock – Did You Know…”