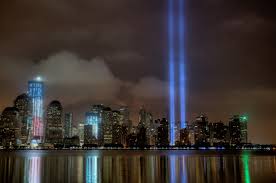 As we have reached the date which is in everyone’s mind today in Australia, I’d like to share some thoughts.

15 years. It’s been 15 years. And still I remember everything.

We all know where we were, what we did. We all remember watching in disbelief.

I remember hearing in the news about the first plane hitting the tower. Like everyone else I thought of a very tragic accident.

Then I watched as the second plane approached and hit. I was safe. In Switzerland. But I knew I was no longer as safe as I was before. I would never be again. The world had changed. Terrorism had changed.

I remember how I felt. I actually feel it again. The fear, the shock, the sadness, the nausea, the stress, the disbelief, the panic. The tears, the bitterness.

And I think that’s what made this event the massive one it still is, witnessing it rather than only hear it in the news later. It hit the core, our feeling of security, of freedom of safety. Of being able to move freely.

Now it was turned into a weapon.

Every time I see a picture of NYC I think about the World Trade Centers and where they are supposed to be. Like two good teeth they were ripped out with force. And with them many lives were destroyed. So many.

Today I think of 9/11, the impact it had on every single one of us and of course of the many, many victims. And their families and friends who have to live with this incredible loss every day.

I also think of all the heroes who tried to do their best to safe as many lives as possible. Still do today.

May we never have to experience anything similar ever again.

This post is today’s contribution for the Taboo Word Challenge. I’m catching up here… The words I had to avoid was “on” and “not”.

get the InLinkz code