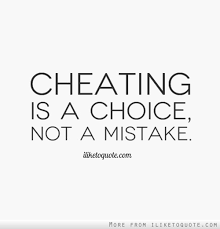 I had a post in my mind that I wanted to write today. But I totally forgot what it was about. Has that ever happened to you? Have you ever had a post clearly structured in your mind and then you forgot everything about it? I forgot about it because my mind got occupied with all the thoughts triggered by my reblog of the question “would you want to know” and the comments of all of you.

Triggered by a comment I believe we need to differentiate between would you want to know at all or would you rather not know forever. If you would find it out would you want your partner to be the bearer of the bad news or would it make no difference to you and the decision you’d make if your partner would break the news or someone else?

I’m not sure of course where you are at but I think I would want to know anyway. If you never know it’s a big secret to be kept. I get that in some cases it seems better to not say anything because of the impact it might have and because in the end it really didn’t matter that much. How can it not matter? It matters of course but in my books if it’s only been about sex then it doesn’t matter as much as if it includes more.

Yes, I call it “just” sex. Because I think that sex is not the most important ingredient in a working relationship. Hang on, not just in a working but actually in a good relationship. It’s not. It’s one of the spices you put in there but the basics are so many different things.

A meaningful relationship needs honesty, trust, conversation, understanding, exchange, dreams, plans, hopes, teamwork, support, affection and of course attraction. They all build the strong foundation it needs for the relationship to last.

Of course part of the attraction is physical. It’s most probably the first impression we have of the other person. Attraction though has to happen on another level too. On a personal one, on a deep one, the mind, the soul.

Without all those ingredients in the “bowl” the relationship will not be a deep one. It will be very superficial and maybe only based on one thing. May it be sexual, may it be financial… you name it.

So if you ask me, if I’d want to know if my husband has cheated on me then I would definitely say yes. And if the question would be if I would prefer to hear it from him or from someone else then the answer is definitely from him. It’s the only way to know that he actually wants to clean up the mess. If someone else tells me I will approach him. He will have to come clear but only because he is forced to. And that would be an issue.

So if he opens up about the mistake made he would give me the sign that I still matter. That there is still a little bit of respect for me left. And depending on where it would go from there the trust needed for a working relationship could be restored. But it would depend on many things. I would try to find out many things in a conversation with him and there would be different outcomes depending on his answers.

First of all it would matter to me for how long my husband had kept it a secret. It matters because it has a lot to do with honesty. So for long did he lie to me, pretending it’s all okay while it actually wasn’t. Because the moment you cheat, no matter if it’s only about sex or actually about more, something is no longer right.

Then I would want to know for how long it was going on. Did he cheat with one woman only and for how long? Or did he have one-night-stands on multiple occasions? Maybe you wonder what difference it would make…

I think it makes a huge difference. If he’d have had one-night-stands it would have been most likely about sex and sex only. Only physical. Maybe those women were able to give him something he was missing in our relationship, maybe something I can or don’t want to give him. It was just physical. So as long as he stuck to keeping himself and of course me safe by using a condom, I think I could easily deal with it. Of course we would have to talk about it and figure out where to go from here. But it would be doable. It would be possible to find back to being the unit I believe we are.

If he would have had a relationship with another woman though over a certain amount of time, the issue would be much bigger for me. Also if he told me after the very first. The moment he wants this woman again and wants to spend time with that woman the situation is different.

If he would have had cheated on me with one woman over a period of time he would have also lied to me. He would have made up stories. The trust would no longer be there. Honesty is out the window. We would have not had the conversation we needed. The most important ingredients would miss in my books. You can’t be loyal if you are dishonest and how can I build up my trust ever again if a secret was kept over a long time. The moment something is no longer a one-night-stand it goes deeper. Feelings evolve. And that’s when I’d feel truly cheated on, the moment feelings for someone else would be involved. 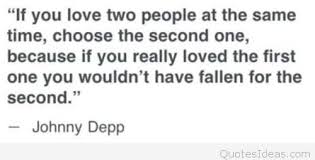 You can’t love two people at the same time. I actually agree with Mr Depp here. Although I don’t think he is a good role model but he got a point here. If you engage with someone while still being in a relationship with someone else, then there is something wrong in the relationship. So the moment the person who cheats actually makes a relationship out of it then the lying and dishonesty takes on a totally different level.

Many things change over the time you are together. We grow together we evolve together, we fight battles together and maybe against each other. We get damaged, we heal. It all leaves its marks. Together you created the history of your relationship with all you’ve been through, all memories you made together.

I’m not sure if men and women think differently in regards to the importance of sex in a relationship. I believe that as women we go through different stages in regards to our sexuality. When we are young we like to have fun too. Just like you guys do. But then we get pregnant, we give birth and our body changes. We have to heal. Not just physically but mentally too. It’s not easy to deal with the idea of a head coming out of there, you know. It puts things in a different perspective.

So while we heal you guys are the same. Maybe also influenced by lack of sleep but your hormones are not on a roller coaster, your body doesn’t have to recover and the baby is actually not feeding from you. So all the tools we had for pleasure suddenly have an entirely different task… You know what I mean… And it makes us see and experience them differently.

So maybe the pleasure we once found in sex with our partner changes too. Lust and frequency might no longer be the same. And to be honest, I can’t really blame a man for missing it. We miss it too. We miss the days we did not have to think hard about when we were not too tired the last time. We miss the days we were thinking like you guys are thinking still. It’s a conversation I had with many mothers touching the subject only slightly but the response was often the same: I would so love to have my sex life back but I’m just too exhausted…

It leaves the guy behind. Because he is not exhausted. As much as he loves his partner he feels his needs. If he is a good guy he still listens to her and accepts being turned down for the thousandth time… And then, in a weak moment it happens. He cheats on his partner.

So if this is only a sexual thing then I think I could get over it. I would have to know it though. It would take a lot of talking and thinking and discussing it over and over again. It would make things different for sure, so I believe. Of course it does. But sometimes it needs a tiny explosion to reassemble things. If this is what it takes to open your mind up for each other in order to move on together again then so be it.

What I most likely could never accept is being cheated on with a relationship with another woman. With something that goes deeper and has a deeper meaning. For me this is the real cheating. The cheating on your trust, on your loyalty, on your believes, your dreams, your future together. This would be the cheating that would hurt me the most. It would take a chunk out of me, of the foundation.

How can you work on your relationship if the trust is gone? If you realize that the feelings your partner had for you are no longer there? I would always wonder why he would stay with me instead of leaving if clearly I wasn’t good enough for him anymore. Not on a sexual level but as his partner. As his friend.

A relationship is like a building. It can be chipped, the painting can fade. It gets old, the weather might take its toll too. As long as the foundation is good the building will not crumble.  A relationship, just like a building, can’t continue to stand tall tough with a broken foundation, a foundation you can no longer trust in.

21 thoughts on “Feeling Cheated On”