Melbourne is well know for it’s 4 seasons. Not just in a year but also in one day. I kid you knot. We truly can go from scorching hot to freezing cold, from dry to wet in one day. Back in Switzerland we used to call it April weather… It just changes and surprises you, messes with you, surprises you, makes fun of you.

Having moved to Melbourne from Switzerland meant not only a language change but also experiencing the seasons in a different way. What my children grow up with in regards to the four seasons they consider normal is so totally different to what I experienced.

While there are still similarities like the fresh and chilly air in fall and the nice warm sun in spring, things are very different.

Like spring. Spring doesn’t happen March to May anymore. It’s September to November. Which in itself seems weird. I still refer to September as a fall month and although I realize that rather than automatically calling it a fall month I stop and thing about what season it’s in here it will most likely always be related to fall for me. Same with March and April. But it’s not just getting used to calling those months spring months. It’s also getting used to the difference in weather.

While spring the way I remember it was the wet and sometimes muddy season of the year in the town I grew up, with snow still everywhere, melting but covering the mountains still for weeks, it means getting ready for the beach here. It’s about putting sunscreen on and being aware of the time you spend in the direct sun. Spring as it is now is very different. It’s about dipping your feet in the still icy water while wearing your bathers and already taking the risk of going home with a sunburn. But then it’s also about rain and going back to the chilly windy days that take you right back to winter.

Speaking of winter (although I go backward here): It’s the season the most different to back in Switzerland where snow was the normal thing. And we are not talking about only a dust of snow which we can get in towns outside of Melbourne (slightly higher up) on occasion. We are talking about proper snow. We are talking about Swiss winters (to my Canadian friends: I know your winters are even more extreme…). Walls of snow. Freezing temperatures. Mountains covered in snow. Snow you actually need to shovel… We are talking about proper winter. Winter has changed in Switzerland too over the years. The amount of snow is no longer the same I grew up with but the months in which temperatures drop to a point where the white stuff falls from the sky is actually still the same. And it’s different to Australian winters no matter if you are spending them in the Australian mountains or not. Australian winters are cold too, at least where we live. But the temperature doesn’t drop as low and snow doesn’t fall around here. Many days you find yourself enjoying the warm sun and a winter coat, snow boots, gloves and beanies are not essential. It’s just a very different kind of winter. It’s sunny, it’s green. And there is the beach. And it happens June to August…

My son was always a summer baby. Well, until the point when we moved to Australia. Suddenly he was a winter child. In a way it doesn’t matter but then it does as having a birthday party in winter is a bit trickier than having one in summer. At least down here. You see, if you have a party in summer in Australia you are most likely to have it outside. Because the weather in summer is more or less always good. The issue you might face is that it could be a very hot day. It doesn’t really matter. There’s the beach, there are parks with trees providing shades. There is plenty of outside time. And in a way you always know that it will be warm.

Not like in Switzerland, where the weather can be crazy. Where even in July you can suddenly wake up to a layer of snow (at least in the mountains). While summer in Switzerland can play a trick on you in regards to suddenly dropping temperatures, it can also do the other thing and surprise you with abnormal hot weather. And that is causing almost more issues than it does down here.

In Australia you are ready for hot weather. You know it will hit you. And it will hit hard. But you are also prepared. Most places are air-conditioned while in Switzerland they are not. So dealing with extreme hot weather is easier here I find. But maybe it’s simply because I feel it’s just normal here. 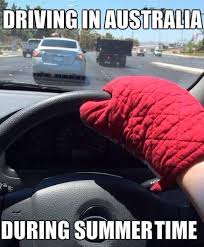 I think the one season that is the most similar is fall. It’s the smell of the air, the temperatures, the color of the sky. For me this is the time the two country “meet” the most. Fall in Switzerland and fall in Australia was and is my favorite season of the year. Although I don’t spend my fall days on a horseback, riding through forests along rivers, enjoying the warm afternoon sun on my back after a chilly morning, I still get a similar feeling when walking in a park, hiking in a forest or strolling along the beach here.

I grew up experiencing 4 very different season throughout the year and it’s something I wouldn’t want to miss out on. I’m glad that we moved to a country and a part of this country, where we actually still get 4 seasons. I like the changes. I like how the air smells different, how the sun and the light seems different. I like the warm evenings outside. I like that I need different kind of cloths through the year. That I can rug up. I would miss my 4 seasons. For me they are part of life.

While the changes in the 4 seasons here are similar to what I grew up with the extremes are very different. Especially in regards to temperatures. The numbers just don’t drop that low, but they for sure go up so much higher…