While baking I used quite a bit of lemons today and every time I grabbed one I couldn’t help thinking about the “if life hands you lemons…”. It’s one of those sayings that are actually spot on but also often so hard to live by. We all know how difficult it can be when you find yourself in a downward spiral. We know how much strength it takes to fight your way out of it. So the idea of making lemonade out of the lemons thrown at you appeals to me but I also know that it takes effort to make the lemonade. So while I’d like to share a post about it as a Blast From The Past, I would also like to share some other suggestions about how to handle a typical lemon situation. 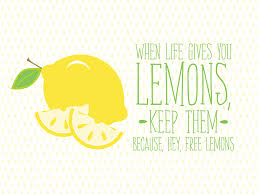 We all know the smart saying: When life hands you lemons make lemonade out of them. Whoever came up with it was really smart. Pretty inspiring too. But to be honest, sometimes it’s just not that easy.

I love lemons. Lemons are pretty refreshing and also really healthy. I don’t like being handed lemons on a regular base though. And you all know what I mean by that. So there you are, suddenly standing in front of a huge pile of lemons. It seems more like a mountain you need to climb than a chance to produce something tasty out of it. And still you can. 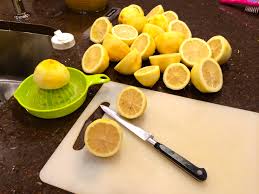 You know you can. All you need to do is cutting those lemons up in smaller pieces and then squeeze the juice out of them, adding sugar and water and it’s done. You know it. But it’s the effort to do it that stops you. If you got handed lemon after lemon after lemon and you stand in front of that pile, a pile that looks higher than Mt Everest, you probably struggle to bring up the energy to do something about it. And yet you have to.

The pile will not go away if you don’t make it go away. It will not get smaller if you don’t start using one lemon after the other. And the lemons will never taste sweet if you don’t add the ingredients to it.

Often, when we feel overwhelmed by something we tend to stay put. We get stuck in the moment. We can’t see the light at the end of the tunnel or feel like we can’t breathe anymore. And yet it’s all there.

Then unfreeze, move and do…

22 thoughts on “Blast From The Past – Oh Those Lemons”