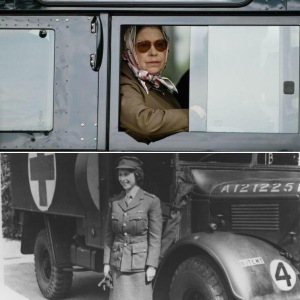 Many people think of Queen Elizabeth II as a model of dignity and decorum but ace driver rarely comes to mind. It’s easy to forget that, as a young woman, the then 18-year-old Princess Elizabeth joined the Women’s Auxiliary Territorial Service during World War II and was trained as a mechanic and military truck driver. When the Queen officially became Britain’s longest reigning monarch last September, a story resurfaced that shows the grit, determination, and wicked sense of humor behind the prim and proper public face. It’s the story of how in 1998 the Queen of England took Saudi Arabia’s Abdullah bin Abdulaziz — who was from a country where women aren’t permitted to drive — on the ride of his life.

Abdullah, then the crown prince, was visiting the Queen’s Balmoral estate in Scotland. Former British ambassador Sir Sherard Cowper-Coles tells the story this way: “The royal Land Rovers were drawn up in front of the castle. As instructed, the Crown Prince climbed into the front seat of the Land Rover, with his interpreter in the seat behind. To his surprise, the Queen climbed into the driving seat, turned the ignition and drove off.”
“Women are not — yet — allowed to drive in Saudi Arabia, and Abdullah was not used to being driven by a woman, let alone a queen,” Cowper-Coles continues. “His nervousness only increased as the queen, an Army driver in wartime, accelerated the Land Rover along the narrow Scottish estate roads, talking all the time. Through his interpreter, the Crown Prince implored the Queen to slow down and concentrate on the road ahead.”

Cowper-Coles said the anecdote was verified by Abdullah, who later became Saudi Arabia’s king and considered the drive truly terrifying; the ambassador called the story “too funny not to repeat.” King Abdullah passed away earlier this year and Saudi Arabia is still the only country in the world that bans women from driving. However, the story of Queen Elizabeth’s pointed “tour” of Balmoral stands as a reminder: the Queen is a woman of many talents and not one to suffer foolish stereotypes gladly.

A Mighty Girl, who is the source of this text also wrote:
If you’re looking for more true stories about Mighty Women to inspire you in the new year, check out the reading recommendations in our new blog post, “Stories of Mighty Women: 2016 Biographies for Adult Readers” .
For many books for young readers starring fictional princesses who enjoy defying the expectations laid upon royal women, visit our “Ultimate Guide to the Independent Princess”
To introduce readers 8 to 12 to two earlier British Queens, we recommend “Who Was Queen Elizabeth?”  and “Who Was Queen Victoria?”. There is also a picture book biography, “Good Queen Bess: The Story of Elizabeth I of England,” for ages 6 to 9 at
And, for a fascinating new book for adults about a former British Queen, we highly recommend “Victoria: The Queen – An Intimate Biography of the Woman Who Ruled an Empire” at

9 thoughts on “Queen Elizabeth – Did You Know…”