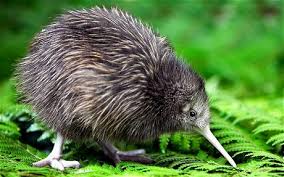 … That a Kiwi can be multiple things? First of all there is Kiwi as in the fruit. Nice and sweet and simply yummy. Then New Zealanders are also called Kiwis and last but not least there is Kiwi the bird. So today let’s talk about the bird and not the fruit or the person…

An average of 27 kiwi are killed by predators EVERY WEEK. That’s a population decline of around 1,400 kiwi every year (or 2%). At this rate, kiwi may disappear from the mainland in our lifetime. Just one hundred years ago, kiwi numbered in the millions.

Approximately 20% of the kiwi population is under management.

In areas under where predators are controlled, 50-60% of chicks survive. When areas are not under management 95% of kiwi die before reaching breeding age.

Only 20% survival rate of kiwi chicks is needed for the population to increase.

Proof of success – on the Coromandel, in the predator controlled area, the kiwi population is doubling every decade.

Kiwi habits and physical characteristics are so like a mammal the bird is sometimes referred to as an honorary mammal. It has feathers like hair, nostrils at the end of its beak and an enormous egg. They are omnivores which means they eat basically everything.

Most kiwi are nocturnal birds, like many of New Zealand’s native animals. Their calls pierce the forest air at dusk and dawn.

Kiwis are ratites. Ratites include some of the world’s largest birds – ostriches, emu and the now extinct New Zealand moa – as well as cassowaries, rheas and tinamous. Kiwi are among the smallest of the ratites.

Nearly all living ratites are found in the southern hemisphere.

Unlike most other ratites, kiwi have four toes instead of only two or three, and their large, dinosauric feet mean they can walk almost silently, their tread muffled by fleshy footpads.

Nearly all ratites are flightless because their breastbone (sternum) is flat – this means there is no keel for strong flight muscles to attach to. The flat chest gave ratites their name – ‘ratis’ means ‘raft’ in Latin, a boat without a keel.

Flightlessness may well be the best known feature of most ratites, but the strongest evolutionary link between them is in their mouths, and in their genes. All ratites are ‘palaeognaths’, a word derived from the ancient Greek for ‘old jaws’. It refers to the shape of the palate bones in the roofs of their mouths, which are more primitive and reptilian than in other birds.

There are two main schools of thought about whether ratites could never fly, or whether they lost that ability.

Since the 1970s continental drift has been the leading hypothesis. It was thought ratites’ original home was Gondwana, the ancient super-continent that once included South America, Africa and Madagascar, Antarctica, Australia, New Zealand and the Indian subcontinent. In this version of the ratite story, they shared a common flightless ancestor and evolved into different species after the continent split up and the birds dispersed on the separating landmasses.

Then, in the mid-2000s, after studying the DNA of both extinct and living ratites, some scientists proposed that ratites had ancestors that could indeed fly. Between 65 and 50 million years ago these birds flew around the world, with most species individually losing its flight as it evolved to suit its new home. In this story, modern ratites are the products of parallel evolution – flightlessness evolved multiple times as different species in different areas followed the same evolutionary course.

Scientists once believed that New Zealand’s moa and kiwi evolved from a common ancestor when New Zealand separated from Gondwana, then believed that kiwi were an offshoot of the emu lineage ­– they were all flightless birds.

However, after studying the DNA of Madagascar’s extinct giant elephant bird (Mullerornis agilis), scientists now believe it was the kiwi’s closest relative. Similarly, DNA studies show moa are older than kiwi in evolutionary terms – their ancestor split from the ratite line well before the common ancestor of kiwi and emus did. DNA also shows the moa’s closest relative is the tinamou, a large group of small birds with weak powers of flight, that live in Central and South America.

With scientists continuing to interrogate DNA from both extinct and living ratites, the mystery about the evolution of kiwi is likely to have further twists and turns.

4 thoughts on “Kiwi – Did You Know… #atozchallenge”