When you are out and about you will see them. People. Doing stuff. Things you would do differently. Maybe you even judge. Because it’s oh so in our nature to do so. You watch and you might think “I’d never to this”, “I’d say that”. And then one day it dawns to you: You just did!

Or you ear drop on people making remarks about others in regards to how they do things wrong and how they, of course, would never do that…

Happens to me all the time. And actually just recently again. So I thought I share my thoughts in form of a Blast From The Past and hope you enjoy… We are all a work in progress. As much as some might think they are, nobody is born perfect. This applies to all layers of life, especially parenting.

We’ve all been there, childless, watching parents with their kids and either saying it out loud or only thinking that we will never to this or that. We might even have been brave (or shall I say overconfident) enough to lend advise. Advised that was based on how we THOUGHT things should be rather than what we KNEW worked for us.

I’ve been there too. I’m no saint. I watched parents and shook my head, thinking how much better I would handle the situation. I judged parents for “parking” their kids, little kids, in front of a portable DVD player or some other device in order to have a conversation under adults. It made angry to see parents give in when the child was having a fit and buying that lollie at the cashier. It made me feel sick in the stomach watching parents feeding their child junk food because it was refusing to eat the healthy vegetables.

I’m still no saint. But today I’m a wiser no-saint than I was back then. Parenting is actually so much more about learning than what I would have thought. It taught me. Life taught me. Parenting taught me. Trying hard to be a good parent taught me.

The lesson I learned as a parent is that sometimes all the good intentions you had, all the plans you made are faster out the window than lightning strikes.

My first born was an extremely picky eater and he did not eat much. It drove me crazy, especially being my first child. So more often than I’d like to admit I let him have the fries instead of standing my ground. I took him out of his bed and cuddled with him until he was asleep so many times instead of letting him cry (something I still don’t agree on). We let him watch his favorite TV shows on whatever device in order for us both to sit down and enjoy a meal together. A meal that was still hot when eating it. We let him watch his TV show so we could end our conversation. A conversation we had started so many times but never managed to get to the point.

Both of my kids brought me to the point I gave in more than once. And sometimes I still cave in from time to time. 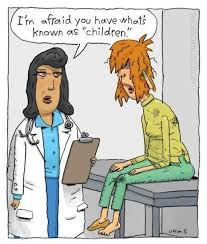 On a good day, you just look at that woman and smile at her with that knowing smile. Maybe even with a feel sorry smile. Knowing that you once were that woman too.

But, wow, life taught you differently!

There is no manual for parenting. Just like education there is no right or wrong. No one way fits all. Every child is different. Every adult is different. Every combination of parent and child is different. So it needs a different approach. And believe me: Sometimes you just don’t want to argue anymore. Not over lollies, not over broccoli, not over fries, chocolate or ice cream. Not over fruit, not over cloths or shoes or socks. Sometimes the time is right to just give in. Sometimes the time is right for that device, to “park” the children in front of a TV. Just for keeping you marbles in line. Just to finish a conversation for once. Just to know they ate something.

Will it do any harm? I doubt it.

My children know their limits. They know that a “no” is a “no” even if I gave in at times. They love eating vegetables and fruits, they enjoy a balanced diet. They play, they are outside, they read, they have good teeth and they are healthy. So far, so good.

What they also learned over the years is, that parents are no super humans. They learned that we have our flaws too, that we reach limits as well and that sometimes we crash land. I believe it’s not a bad lesson for them to learn.

So to all you wonderful people out there who have not had the pleasure yet to become a parent, to be a mother or a father: Consider that the situation will feel completely different once you are actually in it. Things look so much easier from the outside. If you actually manage one day to raise your children without giving in on occasions and without once admit to yourself that you would have never thought parenting will push you over that point, then let me know…

For all you moms out there that have caved in, made mistakes, felt bad about it on occasions but learned your lesson and all your kids and yourself survived anyway: High five, sister!

5 thoughts on “Blast From The Past – Work In Progress”